Okayama City is a vibrant, modern city that is attracting new residents as it grows in size and stature, but the city is small enough to be easily traversed by bicycle or on foot. When asked what they love most about Okayama City, students often mention the interactions they have with warm, friendly local people that they couldn’t have in larger cities.

Spirited townspeople and their markets

Okayama people have the spirit of sustainable development and urban renewal. An older school building was turned into a neighborhood culture center that now boasts its own summer music festival. There are regular, active markets where locals gather and small businesses flourish. At the Park Market, which takes place in a leafy park near Okayama Castle, crowds of locals support neighbors and friends selling all kinds of goods or performing on an open-air stage. Nishigawa Canal Park, a several-kilometers long walkway with benches and flowerbeds found in the city-center, has an organic food market every month. Farmers from nearby towns sell their vegetables, and eateries sell delicious curries and donuts, and there’s even a portable wood-stove for pizza.

The largest mall in western Japan 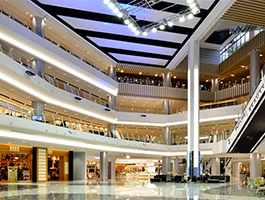 In 2015, Okayama welcomed the largest shopping mall in the entire Chugoku region, just one block from Okayama station.
The mall receives visitors from every direction, including over the bridge from Shikoku island to the south. The mall is seven-floors high and includes 370 stores and restaurants, a movie theatre, a stage theatre and an open-air courtyard on the fifth floor. Shops include not only national brands like UNIQLO and Muji, and western brands like Zara and H&M, but also Okayama’s highly popular brands like Earth Music & Ecology and OKAPITAL.

A giants sports park next door

On Tsushima campus, when you hear a great roar out of your dormitory window, you know that Fagiano Okayama Football Club has scored a goal on the pitch at City Lights Stadium, just a few blocks from Okayama University. The stadium is part of a large sports park that includes a running track, a baseball field, and an arena with courts for volleyball, basketball, tennis and several other sports. Fagiano Okayama FC has discount tickets for students. Even those who are not looking for athletic activity will enjoy having such a large park nearby. Pack a picnic and bring your friends along!